Dan Wentz on the sound of Overload

Dan Wentz on the sound of Overload

Dan Wentz has been around the Descent community for a long time, as he joined Parallax Software in 1995 and contributed both levels and songs to Descent 2.  He also designed many of the levels in the Vertigo series (expansion for D2) and made quite a few memorable custom multiplayer levels including Vampyro and Stadium.  Dan worked as a musician and sound designer with Volition until 2011, and we’re excited to be teaming up with him again on Overload.

1) How did you happen to work on Descent?

I guess you could say I lived a dual life. My prior background professionally was in computer-aided design where I became very comfortable working in and creating within the context of 3D rendering environments.

Also a lifetime musician, I played piano starting at a very early age. Classically trained, this eventually led to an obsession with synthesizers, and the world of recording, sampling, MIDI sequencing, etc.

Working on both fronts with the common thread of computers naturally led me to an interest in PC games. I still remember the first time I actually saw and played Descent in its then very early stages at the last Chicago CES show open to the general public.

But it was through a friend I met while playing in a band that I found out about a job opportunity working at Parallax Software. 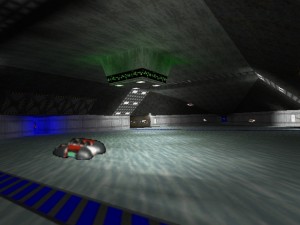 2) Of all the Descent tracks, all versions, what is your favorite and who was the composer?  What about it stands out for you?

That’s a hard question. I guess it somewhat depends on my mood. But, I have to say the opening orchestral score of Descent ][, Base Return by Peter Rotter has always made a deep connection with me and is among my favorites of any game ever made.

That piece has the same emotional impact with me today as it did the first time I heard it. I recently heard it for the first time without sound effects and voice, yet I could still tell exactly what the situation in the scene was based only on the musical cues. That’s not easy to do right, where it’s not too forced or deliberate. This piece just flows.

3) Of your own tracks, which is your favorite?  Can you describe the creation process?

The very first track I ever submitted by request from Matt was what became the MIDI briefing track for the Descent ][ demo! So it naturally has some special significance for me.

The mood was to be very dark with luring anticipation and have a steady constant pulse running through out. I submitted the rough draft after a few hours of working on it and together with Brian Luzietti at Interplay crafted it to what you hear in the game. Being a sequel everything on Descent ][ happened at a very accelerated pace. The basic game play formula had been established, we were refining it more this time.

4) Could you describe the overall style of Descent music?

Descent music is historically a mixture of orchestral, live, industrial and electronic elements all intertwined together. Very few hard rules apply, and you are just as likely to hear live guitar and processed human vocalizations as you are thumping cascades of electronic percussion and evolving arpeggiated synth/bass lines.

In short, it is a mixture of everything that I consider to be fun and awesome to work with. It is dark, haunting at times, distorted and a game where I can always go back to just the music and still relive the experience.

5) What equipment do you use?  How is it different from back in the Descent days?

I have about a 50/50 mix of devotion to hardware and software. I still use sequencing software to run external devices via MIDI for some tracks in any given project but am not afraid to tax my CPU with a few select plug-in instruments and effects.

While speaking of hardware, I love all things made by Apple, Access, Nord, Korg, Roland and Moog especially. Recently I’ve started to include more and more iOS tech into my pipeline, both as a sound generator and controller. On the software side, basically I try to stay away from the most popular/maybe over used instruments and instead try to dig deeper into the ones I have and have more experience using. Sometimes too many options at your disposal can lead to distractions so I try to limit myself to a defined pallet of instruments for a give project.

6) You’re also well known for your level creation?  How did you get into that?

That goes back to my CAD background. I remember having a few days to get familiar with the editor before I began working down there and that was very beneficial. It was so much fun to use it became hard to put down.

7) I hear you were a good Descent pilot.  Are you still?  Did you ever try to design levels to give yourself an advantage?

I guess so, I became better by practice and playing a lot of multiplayer from home. Many close friends still play it to this day.

8) Everyone knows you did sound and music for FreeSpace.  How did that experience compare to Descent?  And how about Red Faction?

Well as I took on Freespace and eventually Red Faction, I was given the opportunity to take what I learned on the previous project and apply it in a more focused, emotionally moving direction. In the case of Freespace the most significant difference for me was the switch from strictly MIDI music to working with samplers and external music gear. Literally working and thinking outside of the box, I became more brave and bold. Freespace 2, at one point in development became something of a space opera and was so much fun to be a part of. It also contained a lot of world and tribal percussion elements.

And then there was the great story and cinematics, what really got me pumped up on FS2 was the inclusion of Hollywood voice actors. What an inspiration that was!

Red Faction was actually a big surprise to me, in that I didn’t think it was going to be so big. There, I kind of split down the middle and anything related to the protagonist was primarily driven by one style of music, hopeful and heroic; while the parts involving the antagonist where portrayed in a darker and menacing feel. That game also had many cases of player induced destruction which allowed for big climatic moments. It also had various styles of game play, from run and gun to stealth. All of these games were fun to work on for many reasons.

9) Are you going to be creating levels on Overload?  Do you think about fitting the music to the level?

Yes and yes! We’re going to be working very deliberately at raising the bar this time around in all categories. Paraphrasing from Mike put it in the Kickstarter video, “the feel of the game is right and everything else derives from there.” The atmosphere alone is going to provide a lot of inspiration.

10) Are there things about Overload that would make you want to create a different kind of music than in Descent?

Certainly, I am anxious to see what direction we take. Above all I want to make it memorable but it needs to fulfill the desires and expectations of those backing the game, the community. Working on the single player experience first will also allow for a more involved approach, tied more tightly to the environments and situations in the game. I certainly see more opportunities for locational/event-driven music in a single player experience and haunting ambient under tones mixed with driving percussion and instruments.