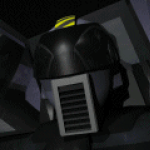 I've been playing video games since Pong with my first shooter being the arcade version of Space Invaders.

I have played and still play some consoles, starting with the ATARI 2600, but am primarily a PC gamer. My first FPS was the original Wolfenstein 3D. After Wolfenstein and Doom, I found Descent and ground ponders just didn't appeal to me anymore.

Most notably I created and managed the heavily modded SWBFII OFFICIAL GLITCHING server for the Playstation 2 version of the game. Loathed by some but loved by many, it was a fun-house server that ran continuously for over 5 years.

I've played Descent since the initial demo release through D1, D2 and D3. I fooled around with the level editor but never made anything for public release. I didn't play on line because of my crappy AOL dial-up, but I did play a lot of 1v1 with my kids using the direct modem and serial connections.

In the real world I work as an applications engineer supporting design and manufacturing software. My background is in manufacturing and fabrication, so I like to make "cool stuff". One of my favorite projects has a video game tie-in, the Aperture Laboratories radio from the game Portal. I built a working replica of the radio for my kids to cosplay with at Otakon in 2009. Making a note here, huge success.

Remember...
There are times you strive for greatness, to reach lofty goals and accomplish noble deeds. Then there’s the rest of the times you just want to blow stuff up.