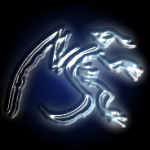 “Every day I think of those shining beaches,” said Dreke. “There were those days when the sky was heavy with storm clouds, and the sea attacked those beaches with its waves, and the beaches fought back by simply being there when the waves receded. Back and forth, the blue-gray of the sea versus the alabaster sands, and a great band of froth to mark the ever-changing front. Then the storm would abate and we'd go out on the beaches and find all the casualties the sea had left behind...”

I perched for hours on that rock, staring out at the gray-blue horizon, letting the waves wash across my feet, until the sun had set completely and the night-fog shrouded beyond hope any chance I might have had to see the ship as it approached. Even then, I listened for a long while. Maybe I would catch the creak of oars or the mutterings of sailors refusing to be perfectly quiet when the captain's back was turned.
No such luck – so I returned to shore, wet and uncertain. For all I knew, the ship had been wrecked. For all I knew, it had merely taken a different route, and they had all come ashore even as I was sitting and watching for them. If the latter, then we were doomed.

I'm a programmer, a published SF/Fantasy author, and a large, winged aquatic reptile.