I’ve been working on a lot of levels lately, but I took a break to work on other issues. One of the recent problems we’ve been discussing with the levels is the need for more variety in pacing. We have a good mix of combat in various-sized rooms with distinct robot types, and we can use robot generators to create additional challenge, but it’d be nice to vary the intensity of combat in more ways or change up the pace on occasion.

At the same time, we’ve been considering whether to use super robots in singleplayer, or more specifically, how to use them so they make sense. They need to feel special, but we didn’t have any cool way to introduce them or a plan for when they should be used.

The main way we decided to address both of these issues is with a new game event called Lockdown. This is a simple but effective tool found in other games–and now in Overload as well–where the player is locked in a small section of a level and forced to destroy specific robots to advance. Along with some supporting UI and a new system for spawning the robots semi-randomly over time (and locking/unlocking doors), we can use Lockdowns in a few ways.

The first way is to simply provide a change of pace, usually a peak in intensity without resorting to robot generators, and as a setup for a decent reward. For example, towards the middle of a level, we could use a Lockdown with a fast burst of robots. Completing the lockdown would then unlock a door with a cache of good powerups. It’s nothing mind-blowing, but making those setups obvious and easy to script is important.

The other major way we intend to use them is to introduce new robots, particularly super robots. Not every super robot will be introduced or encountered this way, but many will, and they’ll essentially be mini-bosses. Super robots will be used in other limited ways, such as guards for keys and reactors, but they’ll never be created by a robot generator or found in large numbers. Limiting their usage should help keep them feeling “super”.

The start and end of the lockdown will also provide an obvious checkpoint in the level (we don’t have saving and loading in the game yet, but we do intend to have automatic checkpoints), and boss encounters will be based on lockdowns as well.

Getting back to super robots, there’s one other way we’ll be using them aside from a mini-boss-style encounter. A few kinds of super robots will always use a special AI mode called “coward” in code. They will be tougher and more dangerous like other super robots, but instead of being aggressive, they try to avoid the player. They have something you want (such as an invulnerability or super upgrade powerup), and don’t want you to get it.

It’s a cool change of pace because instead of being out to kill you, they are essentially the prey and you have to hunt them down. Though we didn’t plan it, they actually feel kind of similar to the Thiefbot from Descent 2, without the annoying part of them stealing something directly from you. They are more dangerous yet quite a bit easier to kill than a thiefbot. Chasing them down and destroying them is challenging, usually worthwhile, and entirely optional.

With super robots now having well-defined roles in the game, and having more ways to vary the ways you encounter robots in the game, we’re feeling more confident that Overload’s robot-blasting gameplay will be enjoyable for the entire campaign. 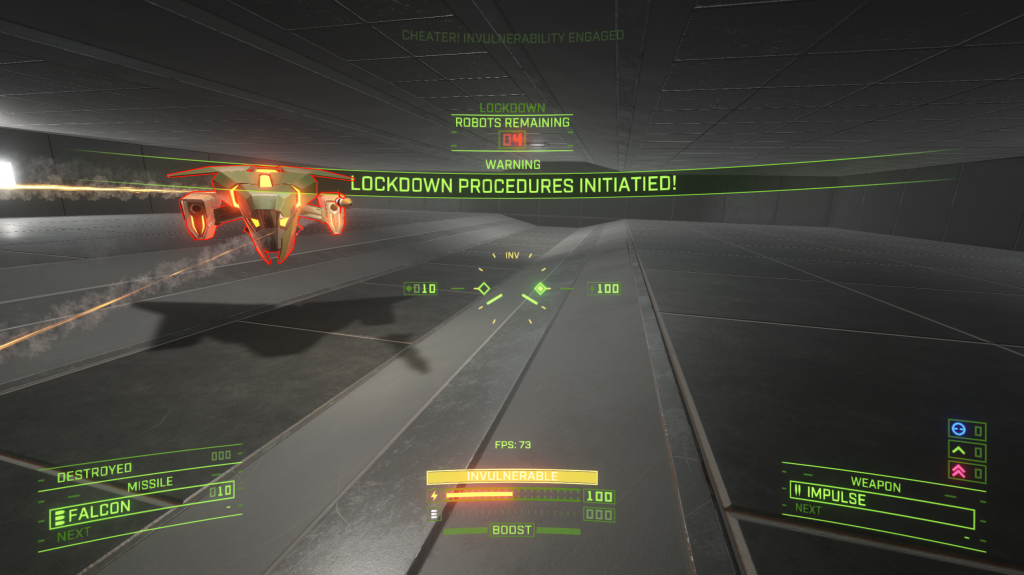