Part of the Dev Team showed at PAX West at the beginning of the month.  It was a long 4 days with a very positive reception.  Here is Luke’s summary:

Chris, Matt, his son, and I traveled to PAX West 2016 earlier this month in Seattle.  We arrived Wednesday, August 31st, but we’d later figure out we could have arrived in the morning of Sept. 1st and still been fine. Thursday is the setup day, and we spent a fair number of morning hours waiting for equipment to arrive.

On the way to PAX, I worked on robot rendering optimizations (see the post from 2 weeks ago).  We had the less optimized build already on the 2 powerful PCs we checked as luggage and USB sticks for the press, and we were ready to use it if my optimizations didn’t work out.  Thursday evening I finished up the new build, and Friday morning we had just enough time to try out the new build.  We tried it on the Alienware mini-PCs we got as part of the Indie Mega Booth.  With just 3 robots in the main room of Syrinx, the framerate went from 32 to 44 at 1080p on the new build.

However, we did find one significa 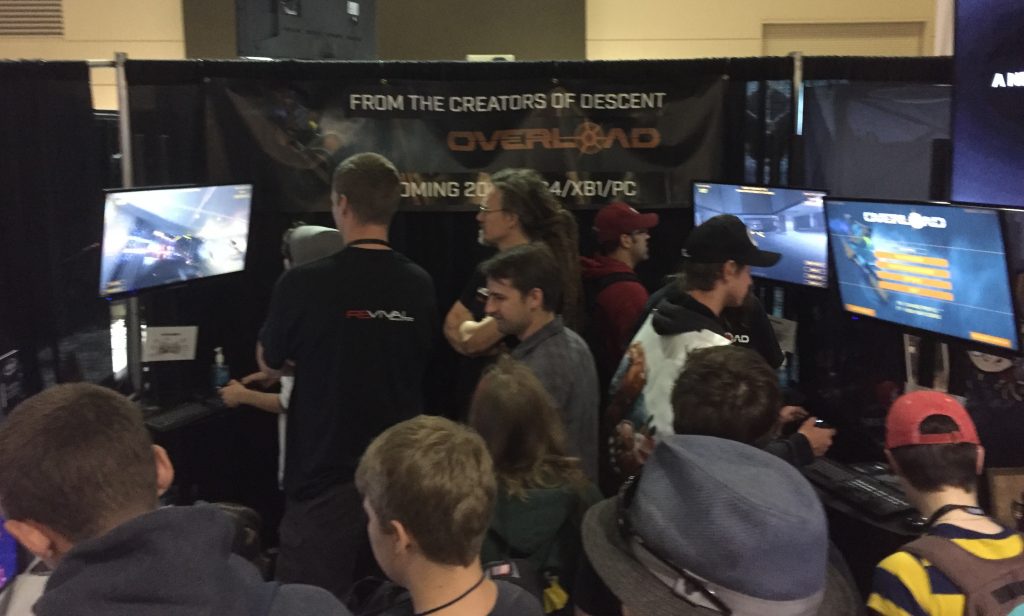 nt bug with robot explosions, but it was a simple fix, then we uploaded the optimized build to all 4 PCs just as the show floor opened.  At this point we had our most powerful PC for a VR station, a slightly less powerful one running 1080p, and the two Alienware mini-PCs at 720p.  We chose smooth gameplay over optimal resolution for the less powerful machines, and I don’t think a single person complained about the slightly blurry UI the entire show.

Once the crowds started to arrive, we were constantly busy for almost the entire 4 days.  The first day, we heard a lot of things like “this reminds me a lot of Descent” and “are you guys big Descent fans?”  We also had a very long line for the VR version, and by 1PM we had a new build for the VR machine with a 5 minute timer instead of the 10 minute one in Challenge Mode.  There were a couple minor tweaks for day 2’s build (7 minute timer for non-VR, tutorial level tweaks), but the game was very stable.

The biggest technical issues we had involved trying to unsuccessfully get a 2nd VR machine up and running. On Saturday (Day 2), we received a 2nd Oculus headset, but after we got the driver installed on the other powerful PC, we got the dreaded “HDMI not detected” error.  The only good workaround for that involves a specific DisplayPort to HDMI adapter.  We tried one at the show that did nothing, another back at our office that worked but had issues (red and blue vertical lines and distortion), and last Monday we finally got the correct adapter from Amazon (too late for the show, obviously).  No amount of driver fiddling and connection changes could fix the issue at the show, much to my chagrin.

Of the people who played VR, about 10% of them couldn’t play past the training mission due to motion sickness.  Given we expected at least a quarter of people to have that reaction, we were very pleased with how comfortable people were with VR.  Quite a few people mentioned that Overload was now one of their top reasons to get a VR gaming rig.

We had about 30 or so press contacts scheduled to stop by the booth at some point during the show, but only about half of them actually made it.  Our booth location and size was part of the issue.  Though we were in the IMB on the main show floor, we only had a 10’x10′ (3 meter by 3 meter) booth, in a location that was not easy to spot unless you walked right past.

That said, we could not have shown the game to many more people than what we did.  Maybe 15% more people could have played the game if we always had someone playing at every station (aside from VR, which was used nearly 100% of the time).  The reception from the people who played it was very positive.  Almost everyone played at Rookie, while some moved up to Hotshot for Challenge Mode, and a few tried Ace/Insane.  A few kids/very inexperienced players played at Trainee and still had a good time.  The gamepad controls were a great success, as anyone with basic gamepad experience was able to control the game fairly well.

The one consistent control issue was Zoom. Quite a few people used it accidentally and would get stuck zoomed in without realizing it.  I’ve been wanting to replace zoom with something more useful/unique for a long time.  It was just a prototype for the KS trailer, and we left it in because it was easy.  But now, after removing it and playing more with flare on Right Stick Click instead, I’m much happier with the controls.  The flare is such an iconic, cool feature for Overload, especially in dark levels, that it deserves a prominent, easy to use button.

Back to PAX: Aside from a few KS backers who stopped by, almost no one had heard of the game before seeing our booth.  At least 800 people actually stopped and played the game, and many more saw the game as they passed the booth.  One of the best reactions was two people literally jumping up and down when they saw our booth and yelling “Yes!” over and over.  Another funny reaction was “Oh my god, you guys are remaking Forsaken!”  I thought he was joking, but he was not.  Never heard of Descent in his life (N64 player growing up).

There were a few big takeaways from our PAX trip: 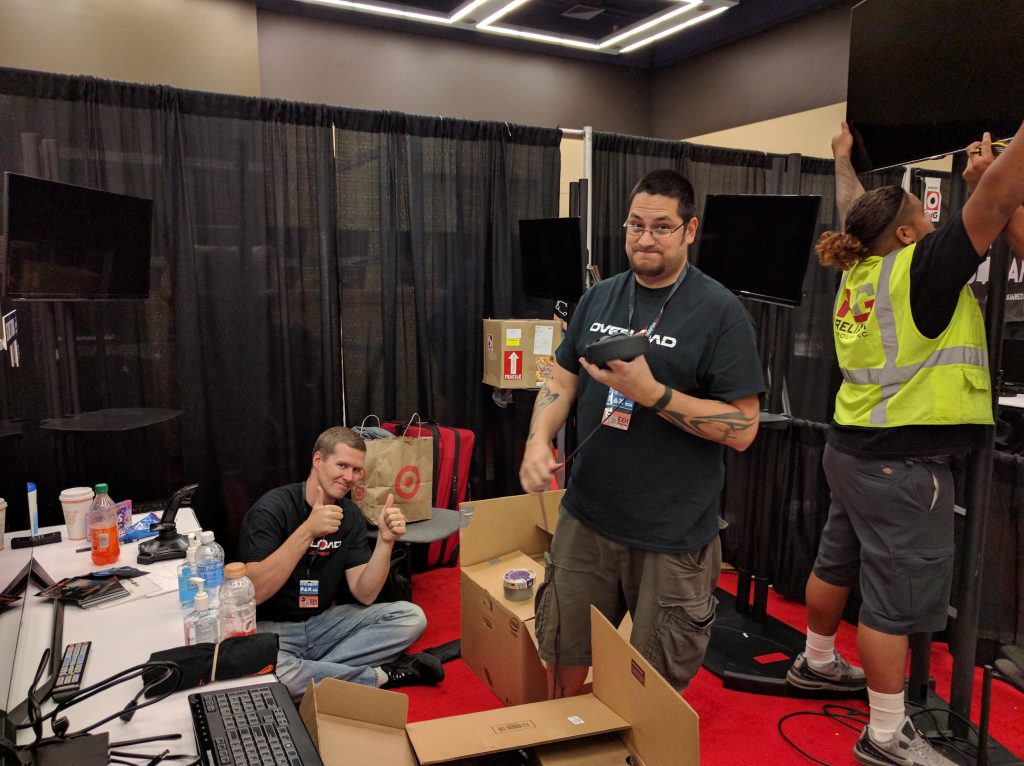 1) The game is going in the right direction. Controls, action, visuals, VR, etc all seemed to resonate very well.  We just need to make the rest of it and keep improving everything we can.

2) If we participate in another show, we need a bigger booth and to plan for multiple VR stations.  VR is apparently still a big draw at shows like this.  Having a better location would be great too, but more room is absolutely necessary in future shows.

3) We need more exposure for Overload.  We think we have something lots of people will enjoy playing, but they can’t enjoy it if they don’t know about it.  And if people don’t know about it, they won’t buy it, and we can’t continue to improve it after release, or make sequels, or expansion missions, etc.

4) ALWAYS get the padding for the booth floor; absolutely worth it.

We’re not sure we’ll be doing any more expo shows until Overload is out, but if things go well with the initial launch, we would definitely want to show in-progress multiplayer at next year’s PAX West.  Either way, we had a great/exhausting time.  And Chris, Matt, and I agreed that Victor, Mike, and Dan will get the honor of doing the next show 🙂